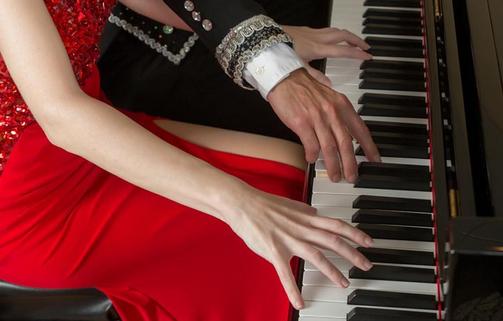 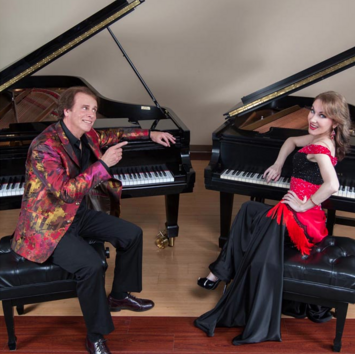 McGurl & Alexandra are remarkable piano virtuosos as well as accomplished vocalists. Katherine sings in five languages and Brian is a compelling musical storyteller both vocally and pianistically. But it’s their sheer diversity that sets them apart. Blending multiple genres within pieces as well as throughout the performance, their extensive musical range includes Ragtime to Rap, Rachmaninoff to Rock, Tangos to Gypsy Folk and Broadway to Billy Joel - with a taste of Victor Borge.

88 Keys On Fire is a “class act” that blends humor and comedy into the performance. Both exquisite performers with engaging personalities, McGurl & Alexandra feature a delightful interplay between each other and the audience - keeping the performance moving at an energetic pace.

Requiring one grand piano plus a keyboard, McGurl & Alexandra feature an enticing repertoire of internationally flavored, well known musical pieces performed with a theatrical and improvisational flair. Highlights include: Libertango, Malaguena, Czardas, Habanera (from Carmen), Phantom Of The Opera and many others.

McGurl & Alexandra present a turbocharged two piano/keyboard and vocal act that blends classical, jazz, pop and comedy with an engaging stage presence. Their multifaceted performance features an array of dramatically innovative and humorous arrangements presented with a flair for the wild and the unexpected.

This magical pairing of American Piano Man and Russian Phenom has been wowing audiences for over five years. We invite you to enter a brand new world of piano and vocal entertainment.

"The 88 Keys on Fire private concert that Brian & Katherine performed was something that I will never forget. Truly magnificent!" 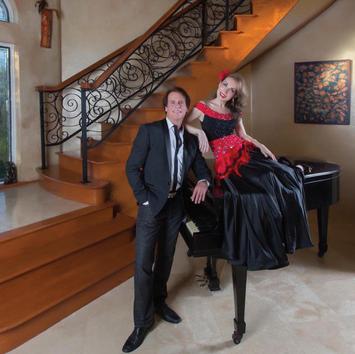 "“Brian & Katherine performed a piano trade off that was so well done it brought the house down.”
- Lenore Mascar, Entertainment Director

SURPRISE!
More than simply a performance, 88 Keys On Fire is an ACT, featuring the element of novelty and surprise - including Brian’s sizzling melodica playing accompanied by Katherine and the band.

For more information about this one-of-a-kind act, please refer to their EPK.